Tags are commonly used when you want to address an action on many Nodes such as when patching Nodes through the API, or as group when developing Flows that should run on multiple Nodes.

Tags can be set on both Nodes and Flows. There are a few tags that are built-in such as #ALL and #BETA, but generally you’d create your own tags.

For example, lets assume you create a flow that should read and transmit the current state of a heat pump. Lets also assume you’d be reading the values from the heat pump using Modbus.

If every Node in your Organization is connected to a heat pump and you want the same Flow to execute an all Nodes, you would set the Node attribute of the first (inbound) Service to #ALL: 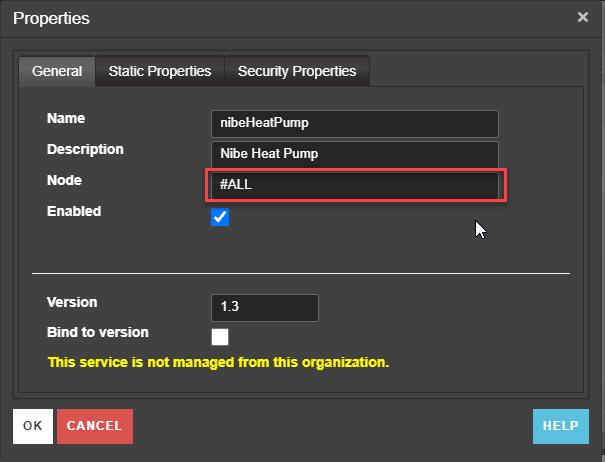 The #ALL tags, as the name implies, causes the this Flow to run on all Nodes

An other scenario would be where not all Nodes are connected to heat pumps, and you only want the flow to execute on a sub-set up Nodes within the Organization. It could also be that some of your Nodes are using a different manufacture of heat pumps, which in turn might require a different Flow/Service. In such cases, you’d be better off using a custom tag such as #NIBE-F2120:

You can patch individual Nodes from the the Node page in the portal, but when you want to patch many Nodes, this approach is not efficient. In such cases you are better off using the API. For instance if you want to update the firmware on many Nodes you should use the Update Firmware API (/api/organizations/{id}/tags/{tag}/updatefirmware), where {id} is the Id of your Organization and the {tag} is the used to filter the Nodes.

Again, if you want to update all the Nodes use the #ALL tag:

While if you are a bit more cautious, you might consider rolling the update per region:

The last sample assumes you have a number of Nodes with “BERLIN” tag set.

Tags can be applied to Nodes from the Node Property page:

The majority of the Node is defined in a package called microservicebus-core, and you can set the preferred version at the Organization page. However, sometimes you might want to test one or two Nodes with the BETA release before updating all Nodes. To do this, you can tag the Node with #BETA or #EXPERIMENTAL. After restarting the Node the microservicebus-core component will update to BETA or EXPERIMENTAL release.